When I’m not writing I make furniture, and the furniture usually has a story.

Either the wood comes from an unusual source, or it is of exceptional quality, or I’ve tried to incorporate some of that wood’s past into the design. If there’s something you’d like to discuss or you have a particular idea in mind, then I’d love to hear from you - just get in touch.

What Land does to People and what People do to Land 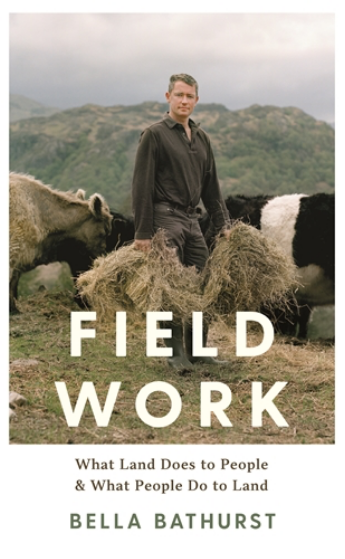 Field Work is published in hardback by Profile Books.Buy from Waterstones here

The Knackerman: The Toughest Job in British Farming
Guardian Long ReadRead it here

If the bureaucrats and the incomers saw this place horizontally then Bert saw it vertically. Down through the soil and deep through the generations. He saw the boundaries between his land and the next with the same us-and-them finality a Londoner might see the hidden borders of gang territories. This field here, this tree, this beast, was as intimate to him as family, but that field there belonging to his neighbour, that was foreign land, as far from him as the Arctic. This was home, that was away. For him, Rise wasn’t an income or a classification or a family or a business or a job. It was everything.

‘Field Work is a journey into rural Britain to meet the people who work in the fields, butchers’ shops, abattoirs, greenhouses and barns that produce our food. It tells the story of the author, Bella Bathurst, moving to a cottage on an 180-acre hill farm in Wales and beginning to see for the first time the life of a farmer up close …

The farm that Bathurst moves to is not pretty or idyllic but the stage for a fairly grim (and often repeated) family farming drama. She witnesses the daily struggle of an old and fading farmer, Bert, as he fights to keep his farm going. It is one of the charms of this book that the author has the curiosity to unpack that story and the past of that little farm and its people, whilst also retaining an empathy and kindness for the human cost of it. She sees, and lets us see, the toll that farming takes.

As Bathurst proceeds, the book widens out from that Welsh farm to explore a range of other farms and rural professions through a series of in-depth portraits. It is a kind of reportage: telling the stories of the people who are left in the landscapes that the rest of us left long ago, but about which we increasingly have strong opinions. Highly researched and deeply thoughtful, it guides us through complex rural issues that are hardly ever well explained and which rarely escape simplistic ideological judgements … Field Work is by turns funny, enlightening, frustrating, and deeply sad.’

‘Some years ago, Bella Bathurst went to live on a cottage on 180-acre Rise Farm in Wales, on the southern slopes of the Black Mountains. And out of her experience she has drawn this priceless portrait of one of the least understood and most frequently vilified of people: farmers … It should really be read by all in this country who buys food - ie, everyone. If anyone wants to understand farming better, I would press this book into their hands, along with James Rebanks’ English Pastoral … The writing is at once tough and lyrical, unsentimental, piercingly truthful and observant … Field Work is heart-wrenching as well as drily funny … a superb testament.’

‘Field Work’s aim is to broaden and insert nuance into our understanding of farming. We meet Ian, a genial knackerman, doing his rounds killing injured, ill or merely inefficient animals. We meet Heather and Sîan, NFU “succession facilitators”, who host communal counselling sessions in which they try to help families work through the thorny issues of inheritance. There’s Dean, the master butcher, whose work in the slaughterhall Bathurst describes in visceral, excoriating detail. Each of these characters is brought to lustrous life, with Bathurst’s prose bestowing on their work a dignity that speaks to one of the book’s central concerns: to recognise that “this place, this land, wasn’t a job or a business: it was everything – past and future, identity and rhythm, daily bread and Sunday rest”.

Bathurst has a seemingly supernatural facility for getting people to speak to her honestly and movingly about the land and their place within it. One passage, in which a young Dorset farmer describes night-time lambing with her father, is among the loveliest pieces of writing I’ve read anywhere. A beautiful hybrid of social history, memoir and nature writing, Field Work manages to bring an entire world out of the shadows. Like the great, largely forgotten Tony Parker, Bathurst shows us how interesting all life is if viewed with the correct mixture of sympathy and curiosity.’